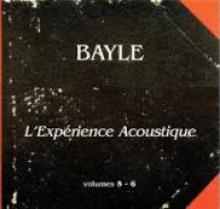 This is a double CD

EXPERIENCE ACOUSTIQUE IS still, in my opinion, a demanding inward exercise — abstract and open.
That is why | have deferred publication until now. Perhaps | lacked contidence in the variable listening this work requires. But perhaps | was right to wait for the moment when, as today, there was a better adaptation to the strange language of invisible sounds.
This experience may seem wild, trying, varied, ...and above all provocative.
it calls for unconsidered involvement like the involvement | myself experienced.
it is useful to recall when it was composed (and the early stages in my career], the confusion of the years following 1968, when | sensed more than | knew, attempted more than | mastered. Whence the term experiment/experience. But the latter extended its scope, soon taking on the appearance of a total re-evaluation of the inward adventure (of the body and its deep-seated rhythms)
At that time, one could read on walls inscriptions such as «Le vent se léve ii faut tenter de vivre.»
(The wind is getting up, we must try to live...) Poetry (an anonymous Valéry) threw us into the streets
No doubt spurred on by the circumstances, my project received a great breath of fresh air, which was quite necessary before plunging airless into the abysses of the studio. Caught up by a programme that was ambitious to the point of insanity, confident only of my eagerness to learn, | was able to verify a number of certainties: the infinite wealth of sound perception, the unexpected fertility of strokes of inspiration, the need for stocktaking.

Even today, | have only reached the first half (in actual fact, the first quarter here with L’Expérience Acoustique, the second in the 1980s with the continuation, Son Vitesse-Lumiére).
A diary of that journey would have been a literary solution. The other remained to be invented, in an «acoustic style» which would provide an introduction to the variety of levels of listening as well as to that of possible techniques.
I thus acquired my own, which sprang from necessity, from the acousmatic challenge.
!he model listener will go through this experience over again according to his Inner rhythm, his desires, fears, urgencies.
Through himself he will learn about himself, his «properties». He will recognise his star