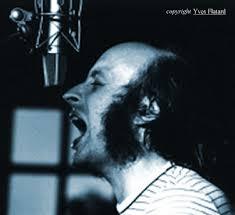 Began working with recorded sounds in 1969. In reaction to death of father, a factory worker, abandoned conventional composing, bought small portable tape-recorder and collected sounds of machinery in workshops, foundries and power stations. Set up directed improvisation route-map (Machine 2) for small chorus to imitate, then transform, these sounds. Recordings of the improvisations, plus machine sources and contemporary news items (Apollo 11 moon shot) formed basis of Machine, an electronically preserved dream (1970).

Soon became interested in devising studio tools for sound transformation. Between 1973 and 77 worked on Red Bird a political prisoner's dream (1973-77: Euphonie d'Or, Bourges Festival). This is both piece of music and mythic narrative; structure based on morphing between sounds of voices, machines, animals, birds, using analogue studio techniques, and directed improvisation. (Further details in Red Bird - a document).

Developed computer sound morphing techniques for IRCAM commission Vox 5, for 'supervoice' in sound-surround, proposed in 1979, made in '86. Subsequently developed large numbers of sound transformation software instruments working through the Composers Desktop Project. These are utilised to the full in Tongues of Fire (1993-4: Golden Nica, Ars Electronica, 1995). All these processes are described in the book Audible Design and made available on theSound Loom.

Between 200 and 2005 he created The Division of Labour, variations on a text from Adam Smith's 'The Wealth of Nations', with the voice of Alex Gordon, Imago which, by a process of continual sonic metamorphosis on a single 'clink' (taken from Jonty Harrison's 'et ainsi de suite') arrives at allusions to the sea, birdsong, gamelan music and the human voice, and Globalalia, using syllables from 26 different languages to create a set of variations on the sounds of language itself.

More recently he has worked in 8-channel sound-surround. The sonic opera Encounters in the Republic of Heaven, a piece in 4 20-minute "Acts", crosses sonic art with storytelling, using the computer to extract the musical qualities of natural speech, and based on recordings of speaking voices from the North East of England. The Secret Resonance of Things is a set of pieces exploring the musical possibilities of scientific data. The first, Supernova, converts the light spectrum of a Supernova explosion (and the spectra of the new elements generated) into sound. The second, Signatures of Chaos, maps the emergence of chaos through the Logistic Equation, and the transition to Turbulence in a rotating liquid via Taylor-Couette Flow. The final piece Dithyramb, Kepler 63c conjures up a welcoming ceremony on this Earth-like planet, using physical modelling to create imaginary brass and percussion instruments played by alien performers.