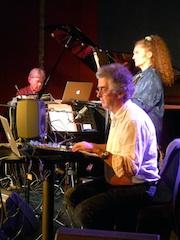 austraLYSIS has developed unusual techniques for control of rhythmic, timbral and harmonic interaction, and since 1995 has used computer interactive and networked technology in the austraLYSIS Electroband. "Incredible interaction" said the Wire (UK); "eclectic and consummate" said BBC Radio 3. Formed by Roger Dean in 1970 as the innovative European group LYSIS, austraLYSIS has played in 30 countries, and made more than thirty commercial recordings.

The Electroband repertoire is based around free and process/interaction improvisation and comprovisation, mainly using compositions of Roger Dean, many written in the programming platform MAX/MSP. Novel computer interaction, real-time computational sound processing and generation is used to complement and extend the acoustic instruments (primarily piano, saxophones), and often to form a complete continuum with them. A new electroband CD, History Goes Everywhere, has been recorded and mixed, and is in production for release in 2014.

"Track after track commands our attention, not just with the drama of what austraLYSIS can do, but with the variety of means, instrumentally and rhythmically, and the degree of emotion they are prepared to risk. What I liked best of all was the inwardness these performers develop, the sense we get of their moving off alone, without compromising the drama of interplay; most of all, without ever releasing tension. This is improvisation that offers increased pleasure at every hearing...Moving the Landscapes is a real coup."

The austraLYSIS Electroband offers performance masterclasses, and also lecture/recital/workshops on jazz and its development; 20th century developments in improvisation and composition; and process and computer interaction in improvisation. The research of leader Roger Dean concerns music cognition as well as computation, and from 2008 has included an empirical project on interpersonal interactions during small group improvisation, correlated with ongoing computational and musicological analysis of the resultant works.

CDs and Books by this Artist:
Acouslytic
Present Tense